Today the Church keeps the Feast of St. Matthias. We know very little about this man. What we find of him is scripture is that he was chosen as the replacement for Judas —- we all know his story.  So for those of us not real fresh on the story of St. Matthias – here is the one piece of biblical text about the great saint:

During this time, the family of believers was a company of about one hundred twenty persons. Peter stood among them and said, “Brothers and sisters, the scripture that the Holy Spirit announced beforehand through David had to be fulfilled. This was the scripture concerning Judas, who became a guide for those who arrested Jesus. This happened even though he was one of us and received a share of this ministry.” (In fact, he bought a field with the payment he received for his injustice. Falling headfirst, he burst open in the middle and all his intestines spilled out. This became known to everyone living in Jerusalem, so they called that field in their own language Hakeldama, or “Field of Blood.”)  “It is written in the Psalms scroll,

Let his home become deserted and let there be no one living in it;
and
Give his position of leadership to another.

“Therefore, we must select one of those who have accompanied us during the whole time the Lord Jesus lived among us, beginning from the baptism of John until the day when Jesus was taken from us. This person must become along with us a witness to his resurrection.” So they nominated two: Joseph called Barsabbas, who was also known as Justus, and Matthias.

They prayed, “Lord, you know everyone’s deepest thoughts and desires. Show us clearly which one you have chosen from among these two to take the place of this ministry and apostleship, from which Judas turned away to go to his own place.” When they cast lots, the lot fell on Matthias. He was added to the eleven apostles.

Now once we get past the gory bits about Judas busting open in the middle and losing his intestines in the field (not recommended reading before the lunch hour), we come to learn that the disciples felt it necessary to fulfill the words of Psalm 109:8. “Give his position of leadership to another.” Now the question became, “how do we do this?” Discerning leadership in the church or in any other institution is not easy work. In the case of Matthias we hear two things. First – the people of God prayed! Novel concept for many, but for those of us who walk in the footprints of Jesus, this should be our first response. The second thing we learn, is that they cast lots – some believed that God would reveal who would be ‘elevated’ in the result of the casting (Incidentally, some still think this way – when you hand rosary beads from your slot machines, or pray that God would affect the outcome of a game of chance, the same principle applies). The lot fell on Matthias – he was chosen and is now known as the guy who replaced ‘that guy!!!’ But the intriguing part for me is what is not in the story. Surely there was more to it. They prayed and no doubt the Spirit spoke. Of the 120 in the community, gifts of a couple of people in particular must have been identified. I wish we know more about what those gifts were. We will never know. That being said, we do know that when we seek the counsel of the Spirit, we can see where God is leading is in terms of finding the gifts for leadership our communities and institutions need.

Just before heading out to Newfoundland last week, we had our first Parish Leadership Team (Our Parish Council). Meeting with our four new members present. Each year we must replace our PLT vacancies (thankfully none of those being replaced faced the fate of Judas). As I read about Matthias this morning I was taken back to that first meeting of a newly constituted group of leaders. It was very good meeting with great input from the four new leaders that had been raised up by our community at our Annual Vestry meeting.  Had me thinking about what we did in early February to elect that group. I am pleased to say that we did not ‘cast lots’ to decide who would be our Leaders in this church for 2012. For weeks leading up to that meeting we asked folks to pray about who might have what is needed to lead. In my own prayers I asked God to reveal for us those who might be able to bring gifts of direction, flexibility, adaptability, insight, awareness, skill and faith to see our congregation continue to grow in faith.   I believe that Chris, Stephen, Dan, and Elaine who have joined our team all bring unique wisdom and vision to us. Likewise our new Warden, Christian Paulton, also brings great energy, a discerning mind and a great love for God and for the church.  I am grateful as are the faithful of this church for those that have served and have now stepped down, including Barbara Lyons, Jerry Pardy, Bob Cooper, Christie Paulton, and Scott Shields – and I am thankful as well for the new gifts lifted up in Stephen Willets, Christine McVeigh, Elaine Janosik, Dan Beaulieau, and Christian Paulton.

On this Feast of St. Matthias perhaps it is a good time for us to reflect on leadership in the church and how we renew that leadership. Often we are guilty of simply plugging names into vacant positions. As the year moves forward we may all have leadership positions in this church, in other churches, in other organizations or institutions that may need to be filled. Let’s agree to take time to step back, take a breath, offer some time for prayer and discernment, and let God lead us in identifying the for us those who will lead….or we could cast lots the next time we need someone to chair a committee?? 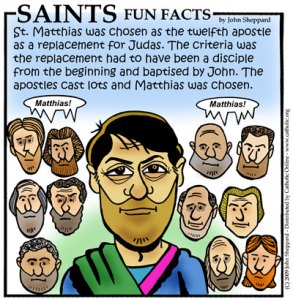