Today is the Third Sunday of Advent. Today’s Sermon is focused on the Magnificat.

The Text of today’s Sermon  is below the photos from today – More or Less! 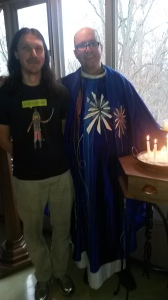 The other day a friend and I were reminiscing about this time of year in Newfoundland. We were recalling that trees were real, were cut hear the few days before Christmas. They came form in over the hill, or across the pond where we cut our firewood, our on the Old Track road. Sometimes we would cut several – choice is always good. We recalled what it was like rigging up the old decorations we had. Putting bubs on the tree… (that’s Bulbs to a Mainlander). Had me reminiscing about the old fashioned Christmas lights that we put on the tree – you might remember too. I was recalling how some of our strings were quite old – taped up in sections – holes in the casing on the wires from the multiple nicks from staples from stapling them to the inside of the window.  How we did not set the house ablaze is a mystery. So many great memories of childhood come rushing to all of us this time of year. There is something about the lovely music and the colourful lights at this time of great darkness that seems to cast our minds to warm recollections of family, of friends, of those who meant the lost to us and the moments that instructed our character. When I let my mind go there, I see reflected in my memory, Christmas Dinners, full houses, visits from neighbours as well as visits to neighbours, a small church full of people, simple gifts but great excitement. It all floods back to me.

As church goes, my memories are kind of vague. I don’t have strong recollections of what happened in Church throughout Advent in Christmas. But there is one thing that I do remember and it washes over me always at this time of the year – ours was a church that had Evening prayer regularly. That meant that we often said the Magnificat –Mary’s song. I recall – strange has this sounds hearing the Song of Mary read as the Gospel in Advent and thinking — That’s where that Magnificat comes from!!! I think I remember it to this day because the words of it were so very powerful for me – from my very youth. In the words of the BCP we would recite:

My soul doth magnify the Lord : and my spirit hath rejoiced in God my Saviour.
For he hath regarded : the lowliness of his handmaiden.
For behold, from henceforth : all generations shall call me blessed.
For he that is mighty hath magnified me : and holy is his Name.
And his mercy is on them that fear him : throughout all generations.
He hath shewed strength with his arm : he hath scattered the proud in the imagination of their hearts.
He hath put down the mighty from their seat : and hath exalted the humble and meek.
He hath filled the hungry with good things : and the rich he hath sent empty away.
He remembering his mercy hath holpen his servant Israel : as he promised to our forefathers, Abraham and his seed for ever.

The words that always leapt out were the assertion that God would put the mighty down from their seat and would exalt the humble and meek; that the hungry would be filled with good things and that the rich would be sent away empty. As I reflect on this many years later it makes perfect sense to me. My sister Helen, 20 years older than i recalled that she got excited about a 5 point apple in a wool sock – simple pleasures – the hope of a God who would fill the hungry with good things was made real for us in small gestures at Christmas that were large to us in the grand scheme of things.

In many ways, I think that at the time I needed to hear about a God who would humble the mighty and exalt the week. I was a victim of some pretty serious bullying in my youth. To say I felt weak, oppressed, and afraid would be an understatement. The very notion of the ‘proud being scattered’ was reassuring to me. Hearing Mary’s Song so regularly was a real reminder to me in God’s social order, the vulnerable, the scared, the weak, and the oppressed were the favored ones. Those brash, and arrogant powerful ones whose very strength depended putting others down, would be scattered, sent away empty. The very fact that a young and vulnerable woman could be chosen to bear the responsibility of delivering Light into the world, gives us all hope. As surely as Mary was given opportunity to bear light in the midst of difficult and trying circumstances – so to we are offered that opportunity. What does that look like? Not as complex as we might think.

It requires that we have imagination and that we be prepared to rejoice in that imagination. Mary’s Song is really a testimony she was prepared to imagine what we might be… imgine how we might live. In our second reading today we hear Paul instruct the community at Thessalonica to –

16Rejoice always, 17pray without ceasing, 18give thanks in all circumstances; for this is the will of God in Christ Jesus for you. 19Do not quench the Spirit. 20Do not despise the words of prophets, 21but test everything; hold fast to what is good 22abstain from every form of evil.”

Do not quench the Spirit. Do not despise the words of the prophets. Paul was reminding the community to embrace the work of the Spirit to call us to imagine change, imagine, God breaking into the current condition and making a real difference. Walter Brueggemann in his book  “The Prophetic Imagination” [a book I cannot recommend highly enough] writes about the biblical narrative from Moses to Jesus, recasting the role of the prophet as one who engages the imagination in ways that moves beyond the dominant mentality [the ‘managed data’ of the prevailing culture] and gives freedom for the life of God to be revealed.

The prophet engages in future fantasy. The prophet does not ask if the vision can be implemented… The imagination must come before the implementation. Our culture is competent to implement almost anything and to imagine almost nothing. The same royal consciousness that make it possible to implement anything and everything is the one that shrinks imagination because imagination is a danger. Thus every totalitarian regime is frightened of the artist. It is the vocation of the prophet to keep alive the ministry of imagination, to keep conjuring and proposing alternative futures to the single one the king wants to urge as the only thinkable one.[1]

The Magificat calls us to Rejoice in Imagination and what it can provide to us. Mary’s brings light into the world but before she does she dares to imagine what the delivery of God-Among us might look like. Her imagination pours out in song and it declares that the entry of Light into the world is intended to excite our imaginations that we might vision the peaceable Kingdom and make choices to make it real. For the peaceable Kingdom to come to fruition we need to act. We need to say YES to the invitation to bear Light, bear, hope, bear kindness and peace. In bread for the journey, Henri Nouwen declares;

The marvelous vision of the peaceable Kingdom, in which all violence has been overcome and all men, women, and children live in loving unity with nature, calls for its realisation in our day-to-day lives.   Instead of being an escapist dream, it challenges us to anticipate what it promises.  Every time we forgive our neighbour, every time we make a child smile, every time we show compassion to a suffering person, every time we arrange a bouquet of flowers, offer care to tame or wild animals, prevent pollution, create beauty in our homes and gardens, and work for peace and justice among peoples and nations we are making the vision come true.

We must remind one another constantly of the vision.  Whenever it comes alive in us we will find new energy to live it out, right where we are.  Instead of making us escape real life, this beautiful vision gets us involved.[2]

I have been reflecting on those Christmases past. I can imagine my sister Helen getting an apple, an orange, and some grapes in a wool sock on Christmas Morning and smelling it an imagining the distant land from which it came and being warmed by the kindness of love of parents who will fill her stocking with fruit that she did not get to see all year. I also imagine myself now. Hearing those words of Mary and imagining that God would deliver me from my torment and embrace me with love and lift me from my lowliness. And you know what? I have seen glimpses of that peaceable kingdom because of people have got involved and cared enough to show me kindness. Simple acts of kindness have made the promise and imagination of the Magnificat come to life for me. The courage of Mary to imagine a future fantasy gives us courage to also keep alive the ministry of imagination.

As we tread closer and closer to Christmas – as we remember and reflect – let us not lose sight of the fact Mary’s call to us was to look ahead, Paul’s call to us also was to let the Spirit guide us and run amok on the status quo, God’s call to us is to make live the Incarnation by engaging in prophetic ministry.

[2] Henri Nouwen, Bread for the Journey – Mediation for December 13