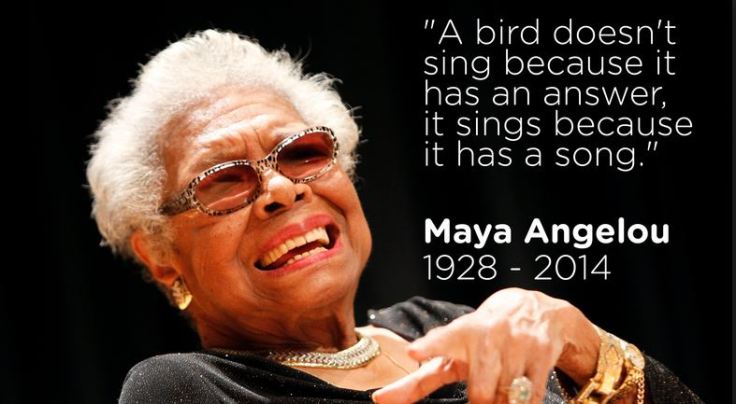 This week the world lost a prophet whose words were soaked with love. In the wake of the death of Maya Angelou, television, newspapers, websites and social media all exploded with a fraction of the many, many words that this woman used to change the world in her time.  May Angelou suffered greatly in her life. She would have every reason to have been bitter and to have reacted out of that bitterness. But hers was a choice to listen to the inner voice of Love that has breathed us into being. He last tweet, just a few days before her death read,

Listen to yourself and in that quietude you might hear the voice of God.

In one lifetime we hear many words uttered by many voices. It would be fair to say that we often take more seriously the voices of negativity and cynicism than we ought to. Angelou’s reminder to listen to what God has created – to listen to yourself – is a rejection of cynicism and negativity and an embrace of the voice of the One who calls us beloved!  Angelou took the hurt that she had encountered in her life and used words in a transformative way to overcome – and more than overcome – her transformative use of the word gave others hope to also overcome. She knew how powerful words could be and instead of using them as weapons, she infused the world around her with words of love and hope.  In her powerful poem – Still I Rise she wrote:

I found her writing inspiring, but more than that I found it sustained me – and I know that long after she is gone, her words will continue to sustain me.  That’s the real gift and wonder of prophets. They speak words of great vision and witness, often during the most difficult and oppressive times. The words they speak inspire generations to not just survive difficult times but to thrive and grow in them. Those words that allow growth in the most acidic of soils sustain for generations to come. The voices of the prophets live on. The words of the prophets are passed to the next generation to struggle to be liberated from whatever has enslaved them. Angelou’s words of love have brought peace and hope to people from generation to generation and will continue to do so for generations to come. She sang because she had a song!

I close this long-delayed blog post with these words of Angelou that I have made a part of my daily prayers.

“Let gratitude be the pillow upon which you kneel to say your nightly prayer. And let faith be the bridge you build to overcome evil and welcome good.”

2 thoughts on “She Sang Because She had a Song”