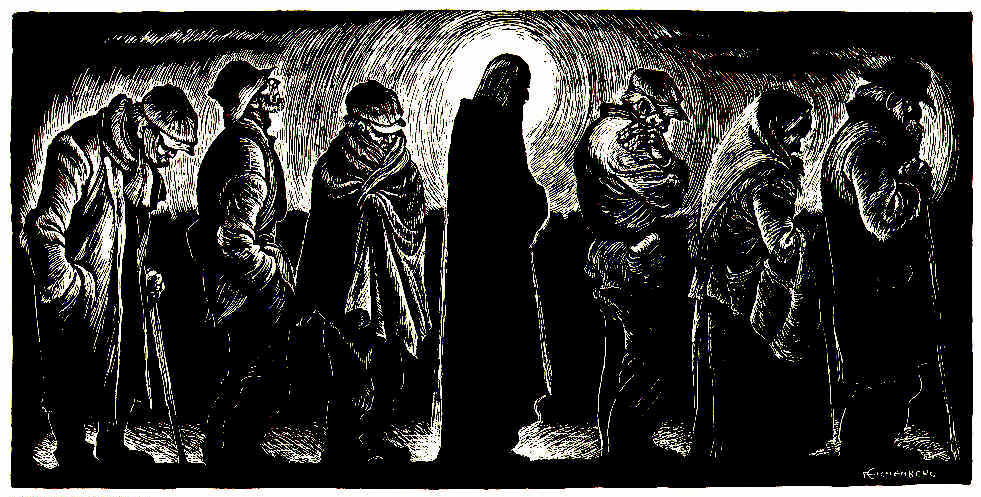 Those who are marginal in the world are central in the Church, and that is how it is supposed to be!  Thus we are called as members of the Church to keep going to the margins of our society.  The homeless, the starving, parentless children,  people with AIDS, our emotionally disturbed brothers and sisters – they require our first attention.

We can trust that when we reach out with all our energy to the margins of our society we will discover that petty disagreements, fruitless debates, and paralysing rivalries will recede and gradually vanish.   The Church will always be renewed when our attention shifts from ourselves to those who need our care.  The blessing of Jesus always comes to us through the poor.   The most remarkable experience of those who work with the poor is that, in the end, the poor give more than they receive.  They give food to us.  –  Henri Nouwen

it’s been on my mind ever since….

How do those words strike our ears? Henri Nouwen never mixes words. “Those who are marginal in the world are central in the Church.” Powerful stuff!  Powerful because we see it at operation in the church and in the world in general. Particularly at the moment as we are subject to a wildly polarized American election that to date has racked up $2 Billion (with a capital B) in spending. Even here in Canada we cannot escape the non-stop advertising. Each candidate busy telling us why the other candidate is not going to be good enough because they will not deliver enough to the ‘middle class.’  Not to mention these Super PACs and individuals like Thomas Peterffy who is busy telling the American people that ‘socialism is bad because “the rich will be poorer but the poor will be poorer too!” The poor’s plight seems always connected to that of the wealthiest. The logic seems to be: ‘As long as we look after the rich the poor will be ok.’ It just does not seem to jive with what Nouwen shares above.

The religious right in America has jumped on this election as well, telling congregants to vote ‘against Obama.’ They must because he is pro-choice and favours same-sex marriage. All the while I keep asking myself why in the name of all that his holy are the faithful not asking candidates about those who are on the margins. Why is it that the ‘Christians’ we see interviewed in America have concerned themselves only with the rights of the unborn and the ‘sanctity of marriage?’ Better yet. I ask myself, what if tending to those who are marginalized means asking difficult questions about what it means to be present to those who have been marginalized because of their sexual orientation. Or what does it look like to seek and serve Christ in the young woman who is scared to death because she is pregnant and does not know where to turn? The informed Christian who is considering the political landscape needs to ask him/herself some serious questions about what we do for those who are pushed to the very edge. Jesus had much to say about poverty, and about the vulnerable – but Christians who make their voice heard seem to be completely unconcerned about the plight of the poor and the marginalized.

How is it that the Church has lost touch with the foundational principle that ‘the blessing of Jesus always comes to us through the poor?’ In our own country we are facing cuts to programs that tend to the basic needs of those who are most vulnerable. These cuts are delivered as a part of a bill that contains so much that most MPs will never have time or the interest to read.  Today for instance, we learned that Immigration Canada will now tighten up the language requirement to make application for immigration to Canada. So implicit in that is the notion that it be more important to know that a person speaks enough English, than to know the conditions that an individual is trying to escape. “We are sorry that you may not live to see thirty young man, but you are incapable of using the right sentence tense in English.”  It is ridiculous really. This is just one example of the more conservative Canada whose concern is with questions like “how much,” more than “why or why not?”

And what of the Church’s response to the poor and to those on the margin? Have we become so comfortable in our pews that we really could not be bothered? We are looking for Jesus in the chapel and in the sacraments, but we have been reminded again and again where Jesus resides. In Matthew 25 Jesus tells us that he is to be found among the hungry, thirsty, naked, lonely, and the prisoner. The founder of Iona George MacLeod reminded us that “Jesus was crucified not in a cathedral between two candles, but on a cross between two thieves.”  I sometimes think that our respectability and our concern for being ‘proper’ have obstructed our view of social gospel that is the engine of our faith. We were called in the beginning by Jesus and continued to be called today to be a people who step out of our comfort zones to be with those who have been most rejected and most forsaken.

In the past few days many people have praised President Obama for his handling of the disaster across America. Even his foes have been impressed that he took such a strong position of leadership. I believe the reason we can be impressed is because we know in our heart of hearts that people should not be left to their own devices. It does not matter how conservative one’s political position may be (see New Jersey Governor, Chris Christie), as a people we want to believe that if we were washed to the very margin of existence, we would not be left to just ‘pull ourselves up by our bootstraps’ when we have no straps to pull up. I think we are impressed by a leader who will take on the role of helper because we all fear inside that we could be that person blown to the fringe – dare I say that we may even at some point have been the person living on the outside looking in just hoping that someone would step up, speak up, and take action to come to us and welcome us in.  We would want to know that if we were in the bread line, we would not be alone.  It has been most impressive to me to see the New Jersey Governor and the American President holding people in the pain and simply helping them grieve.

Let us remember that we are called to go to the margins — and seek to go there, and be present there, and meet Jesus there.

2 thoughts on “Jesus in the Margins”