Celebrating a Saint on the wrong day …

I consulted the calendar and planned a number of Saints Days celebrations on Wednesdays.  It is a little project I have undertaken in hopes of creating a Wednesday Community at St. Aidan’s. On the whole we like it very much.  Each we have a decent size group, we commemorate one of the saints and we enjoy lunch together afterwards! Good times.

Wednesday was one of those days that I got caught having us celebrate the wrong guy on the wrong day.  There are two great saints named Ignatius. One is Ignatius of Loyola and the other is St. Ignatius of Antioch.  The latter’s feast day was Wednesday October 17, but the prayers we offered during Mass on October 17 were for Ignatius of Loyola.  I only discovered my error when a colleague kindly pointed it out to me on Facebook.

The poor man who should have been venerated at St. Aidan’s church today was among the Apostolic Fathers and was the third bishop of Antioch. He met a sad end when he was martyred in the coliseum in 108. That was particularly sad way to go. Nothing to nice about being devoured by lions. Although legend holds that Loyola proclaimed, “I am as the grain of the field and must be ground by the teeth of the lions, that I may become fit for His table.”  What a brave and noble man – who really deserved to be remembered on Wednesday. My apologies to good St Ignatius of Antioch for getting him confused with St. Ignatius of Loyola. This later Ignatius was the founder of the Jesuits. (1556) His feast day is July 31, so he got celebrated either really early or really late – your call. 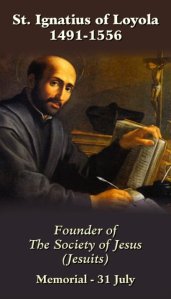 Now I am left wondering if God heard those prayers. The stress of it all. I mean if you pray for a Saint on a day that is not appointed for that saint – does anybody hear? I sure hope so, but who’s to say for sure? All I know is that it was a productive time together with fellow sojourners praying in the spirit of St. Ignatius of Loyola for love that would be overflowing from us to others, a love that would infect and affect the world around us. As we broke bread together we were reminded that we are surrounded by a great cloud of witnesses and know that we bear witness to a faith that has raised up many great and shining examples of following Jesus – many of them with the same name! So I made a priestly error this week and we all prayed remembering the ‘wrong’ St. Ignatius – but thank God for His/Her Holy ability to interpret the words we say and understand the intent on our hearts. Thank goodness God is able to make good with priestly errors – because I have made many and I can’t imagine that I am alone!

5 thoughts on “Celebrating a Saint on the wrong day …”