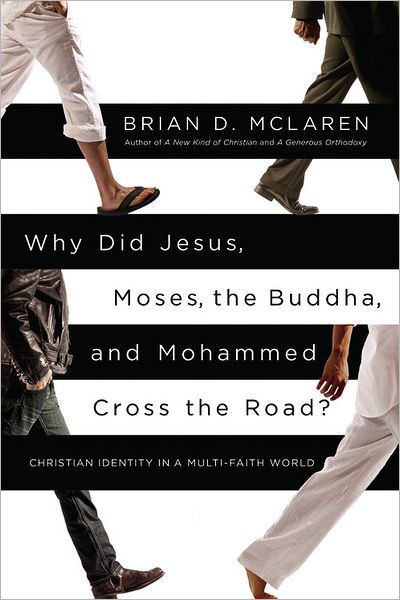 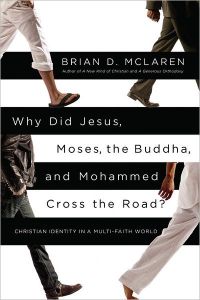 I have been reading Brian McLaren for some time now, so I was interested to read his latest book, Why did Jesus. Moses, the Buddha, and Mohammed Cross the Road? This book was fittingly released this week on September 11 and it piqued my attention as it is in the wheelhouse of my doctoral thesis.  I downloaded the book to my iPad and was off to the races last night.  Given the recent developments in the Middle-East this book is very timely. Those tragic and violent acts had me wanting to once again reach back to the work that I have been engaged for the past few years and seek direction in this time of unspeakable violence.

That just caused me to say a great AMEN! In Conversation, Not Conversion: Deepening Christian Faith and Commitment through Interfaith Dialogue, I take the theological stance that we ought to be drawn closer to people of other faiths as a faithful response to the baptisms to which we have been called. Conversation Not Conversion, sought “to discover what happens when we seek to learn more about people of other faith. Specifically, [the] work affirms the notion that at the heart of fostering a deeper expression of our own Christian faith is a relationship with those of other faiths. Learning more about the other and his/her faith can lead to an enriched experience of one’s own faith.”[2]

In short, our need to be in good relations with people who are ‘other than’ ought to be driven by nothing other than the commitment we have made to Jesus. 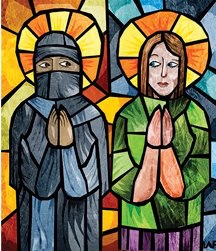 Consider what we promise in baptism.

“There are key contractual or covenant commitments that are proffered by each Anglican at baptism and indeed at every baptism attended subsequently, by way of reaffirmation:

We strive for peace and justice for all people and respect for every human being.  We promise to honour dignity in others. I believe that it is outrageous to suggest that I can honour the dignity in another human being if from the moment I meet him/her I need to condemn that person because he/she is not like me.

“Understanding the faith of others should strengthen rather than weaken a person’s commitment to his or her own tradition.”[4] To illustrate his point Muslim scholar Liyakatali  Takim, who wrote those words, uses the example of Professor Wilfred Cantwell Smith, who reportedly, when he was asked if he was a Christian, responded, “Ask my neighbour.”[5]

Ultimately that is the question we need to all ask ourselves. What we see often in the church runs counter to the messages of our baptisms.  McLaren writes, “In the Bible I read about love, love, love, but in various Christian subcultures in which I’ve participated, I keep encountering fear, superiority, and hostility. In a wild array of forms, the message comes to me from the centres of religious power: I can’t belong to our us unless I am against our them.”[6]

Sadly we see this in people like the Christians who have endorsed this ridiculous video that has inflamed current tensions. So it is with people within our communities whose response to the most recent acts of violence is to suggest that a violent reaction is the answer. So it is with politicians who have politicised these recent events to further their agenda to gain power.

But ours is a call which says that we are to love; not just love neighbour or friend, but to love enemy even.

“There is something real and good in my faith—a call to love God and neighbors—that I can’t abandon without feeling a pang of betrayal. There is also something wrong in my faith—a vague hostility toward the cherished religions of my non-Christian neighbors—that I can’t tacitly support without feeling an equal and opposite pang of betrayal.”[7] We are called to live a way of life that is admittedly difficult. It may even seem foolish to the world which sees only competitive ways of living. We live in a world of winners and losers.  But when we embrace this way of life, sadly we all become losers.

These have been difficult days. They are tough days to declare openness toward our Muslim brothers and sisters, when so many want to lash out. But we must be reminded – Muslims are appalled by this violence. Christians ought to be appalled by it as well. We all need to channel our anger, our hurt, our sadness, and our disappointment into building relationships, removing barriers, restoring hope, and rejecting hatred, vilification and vengeance. If we do not, we will all feel a pang of betrayal.

9 thoughts on “Am I a Loving Christian? – Ask my Neighbour!”