George MacLeod was a tremendous man who founded the Iona Community in 1938. He rebuilt the ruins of the Abbey with people training for ministry in the Church of Scotland. His model was community driven as those who went to Iona lived as community while working there. After completion the community model was retrained as Iona took on an ecumenical dimension and began welcoming guests from all over the world. The worship, the music and the life of the community is very much focused on justice, peace, creation and bringing faith to the world. McLeod was quoted as saying; “I simply argue that the cross be raised again at the centre of the marketplace as well as on the steeple of the church.  I am recovering the claim that Jesus was not crucified in a cathedral between two candles, but on a cross between two thieves, on the town garbage heap, at a crossroad so cosmopolitan they had to write his title in Hebrew, Latin and Greek.  It was the kind of place where cynics talk smut, thieves curse, and soldiers gamble.  That’s where he died.  And that’s where Christians ought to be and what Christians ought to be about.”

Being at Iona was a great reminder that our call is indeed to be community by being called out of our churches and into our neighbourhoods. We experienced liturgies focused on refugees, the environment, and justice and peace as well as gathering and leaving liturgies. The Eucharistic celebrations were tremendous in that they were a great reflection of encouraging the community to be the Body of Christ. We read in Henri Nouwen’s Bread for the Journey, “When we gather around the table and break the bread together, we are transformed not only individually but also as community. We, people from different ages and races, with different backgrounds and histories, become one body. As Paul says: ‘As there is one loaf, so we, although there are many of us, are one single body, for we all share in the one loaf.’ Not only as individuals but also as community we become the living Christ, taken, blessed, broken, and given to the world. As one body, we become a living witness of God’s immense desire to bring all peoples and nations together as the one family of God.”

Communion at the Iona Abbey was transformative for me. It was a real reminder of who we are. When we gather at the table we gather with the multitude of those who have witnessed before us as well as those who stand with us today. Being with so many from so many places was a reminder of just how many and how diverse of a group we are when we stand each week at the table. We stand together in solidarity with Jesus who used simple elements of the earth, bread and wine, to show us who we are and who we are called to be. As different as we all may be, we become one. We bring the gift of our diversity to the table and pray for the courage to push back from the table and go into the world as the living Body of Christ. We are called to go into a world which is diverse, divided, and dynamic. We need to go to the crossroads, the garbage heaps, and the places of cynical smut and bear witness to Jesus. We are the broken body, we are the blood outpoured.

The evening before we left Iona, there was a celebration of communion. The center aisle had a table set for the feast that stretched the whole length of the front section of the church. The chairs were rearranged so that we were all sitting around that table with the celebrant at the end of the table. (I suspect that if the space could have provided it, the table would have been round). 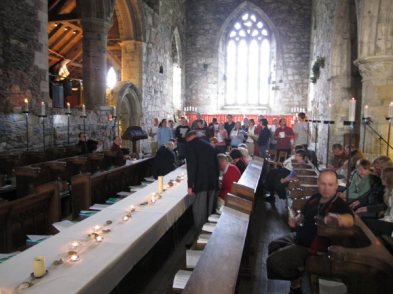 It was a very stirring moment to be at that Eucharistic table. We were from different places, races, and communities. We spoke different languages and dialects. We were men and women. We were gay and straight and transgendered. We had different theologies. We were diverse and a week earlier we had been strangers. Together we were a painting of Body of Christ. It was a wondeful mosaic.

As we left the Isalnd the next day I was still living that closing Eucharist. The staff and volunteers that make Iona Abbey what it is, stood on the peir and ‘waved us off.’ As we sialed away and they waved, it was as if we were being reminded that having been well nourished at Iona, we were now called to go into the world. We drifed away from our table experience to find the many tables around the world at which we will dine, each time hoping to bear witness to the Body of Christ – to bear witness to Jesus.

Tomorrow we will gather around the table at St. Mark’s. We too bring our uniqueness to the table. We bring our own diversity. We will break the loaf and in so doing we will stand in solidarity with Jesus and all who have followed him. We will proclaim forgiveness of sin, resurrection to new life, hope to all in despair, and love to those forgotten. It is a great gift to celebrate communion and an even greater gift to take the love we receive in that sacrament into the world. I am so pleased to have experienced communion at Iona. It made me all the more grateful for the sacrament that we share each week together. Feel free to join us at the table at 8 am or 10:30 am on any Sunday or on Wednesday at 10:30 am.

One thought on “Iona and Eucharist”